Jurassic World was one of the biggest blockbusters of 2015. It featured iconic characters, dinosaurs, terrifying hybrids of deadly creatures, and many camera tricks. The hype is real every time a sequel of Jurassic World is released worldwide which is always accompanied by a release of Jurassic World toys. Kids and adults both get excited about these releases. 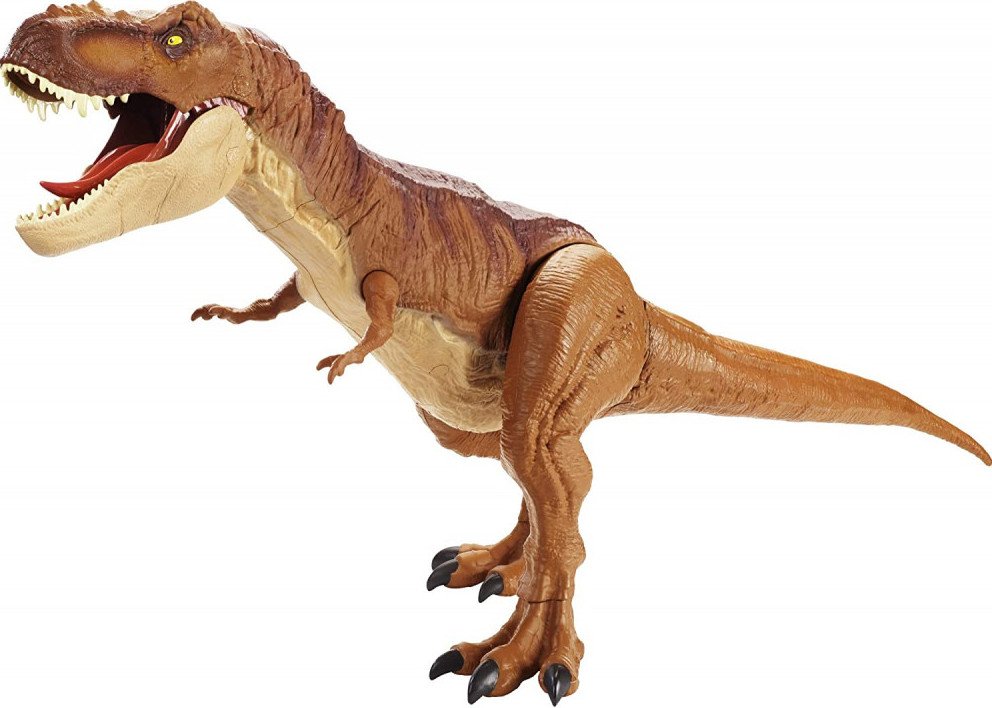 The colossal yet vibrant T-rex figurine is a guaranteed crowd-pleaser. The amazing yet huge dinosaur figurine by Mattel is inspired by the iconic beast in the Fallen Kingdom. It is one of the best-selling Jurassic World Toys. It stands a whopping 3 feet tall and pleases the crowd within seconds.

Moreover, the figurine features movie-inspired markings, authentic details in the scale, articulated legs and arms for realistic actions. Yet, you have to insert batteries to see the T-rex move with its thrilling action.

Do you want your mini Jurassic World toys back? No problem. Open up the T-rex’s belly pouch. You will see the mini dinosaurs fall right out. It feels like the T-rex is giving birth without making a bloody mess. 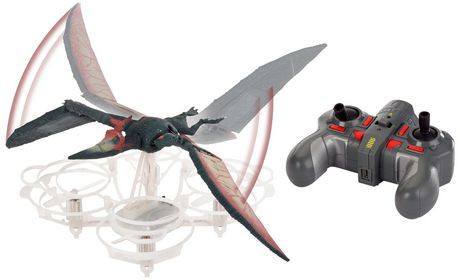 A fully functional yet pricey drone with the markings of a Pteranodon. It is a remote-controlled drone that performs stunts in the air. Moreover, you can fly it up to 25 ft in the air. Amazing for a dinosaur-themed drone, isn’t it?

The auto circle mode in the drone recreated the Pteranodon hunting for its prey. Whereas, the wings flap as the drone rises and falls in the air.

Furthermore, the Autoland mode swoops to kill the prey. But, it also allows kids to land it without damaging the dinosaur’s interior. You can charge the toy via a USB cable. Moreover, the toy comes with a handful of replacement parts in case the kids damage it in the air. A lot of damage can happen if the drone meets the wrong woodpecker.

The toy is as pricey as other drones but the frame is quite sturdy and it should last a good while. 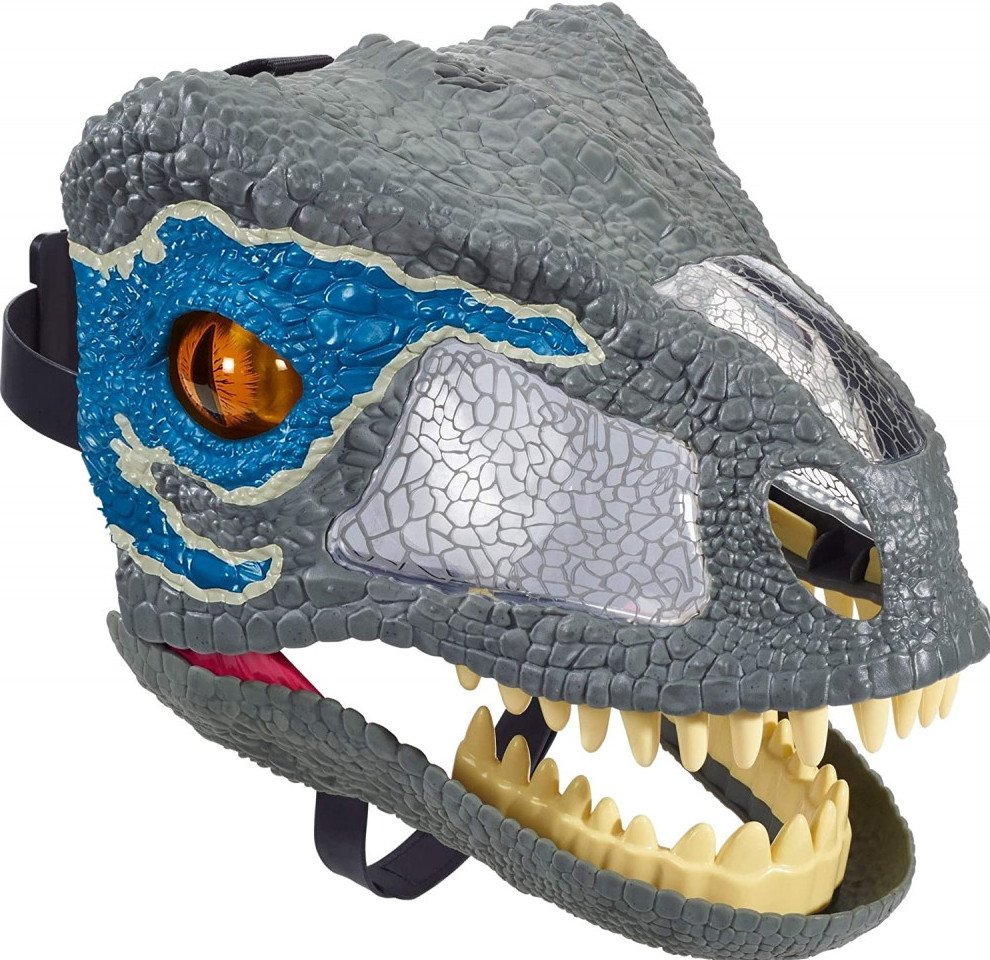 This toy mask is inspired by the breakout star in the Jurassic World movie, velociraptor. The velociraptor killed and did a lot of damage in the movie by its roaring and constant chomping. They chomp and roar blue mask feature movie-accurate colors. Moreover, it consists of two rows of sharp teeth and realistic skin texture.

The best part about the mask is the eyes of the velociraptor move inward. This way you can focus them on your next prey or meal. Yet, the jaws of the velociraptors work electrically and open to various degrees. The mask makes a different roaring sound at each degree. The nose and eye openings let your kid breathe and see while the straps are comfy enough to stay on the head for hours. 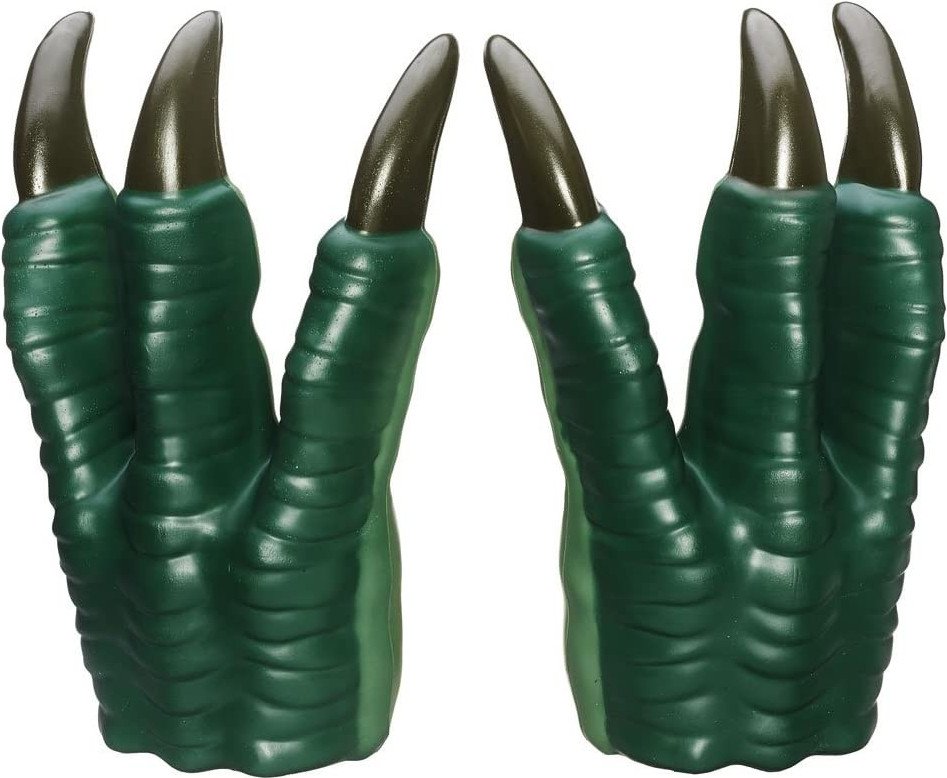 You can twist, bend and flex these treacherous yet dreadful-looking claws of the velociraptor. Pretend to play with your kid or take him and the claws to the dinosaur salon for a little buffing. Each set of velociraptor claws come with an interior elastic band. The elastic bands are perfect for any size of hands. 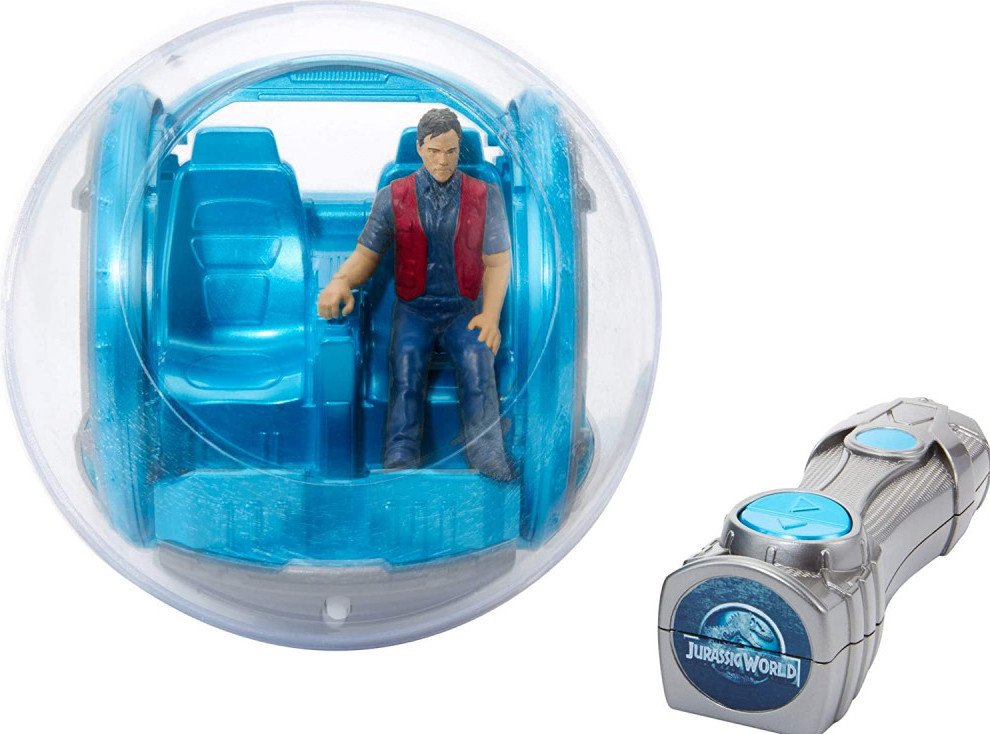 One of the best and most innovative props in the Jurassic World movie was the R/C gyrosphere. It was a motorized giant orbit that looked like a prop from American Gladiators. It rolled the visitors to and fro across Jurassic Park. It was a safe orbit and even the T-rex in the movie could not break it and eat the people inside.

But, Mattel’s Gyrosphere playset is not as strong as the one in the movie. The toy gyrosphere moves in all directions. Moreover, it is compatible with any action figure that is 3 ¾ inches in size. For instance, if you have G.I Joes, Flint, Sergeant slaughter, and quick Kick lying around somewhere, you can take them for a ride in the gyrosphere amongst hundreds of ankylosauruses. 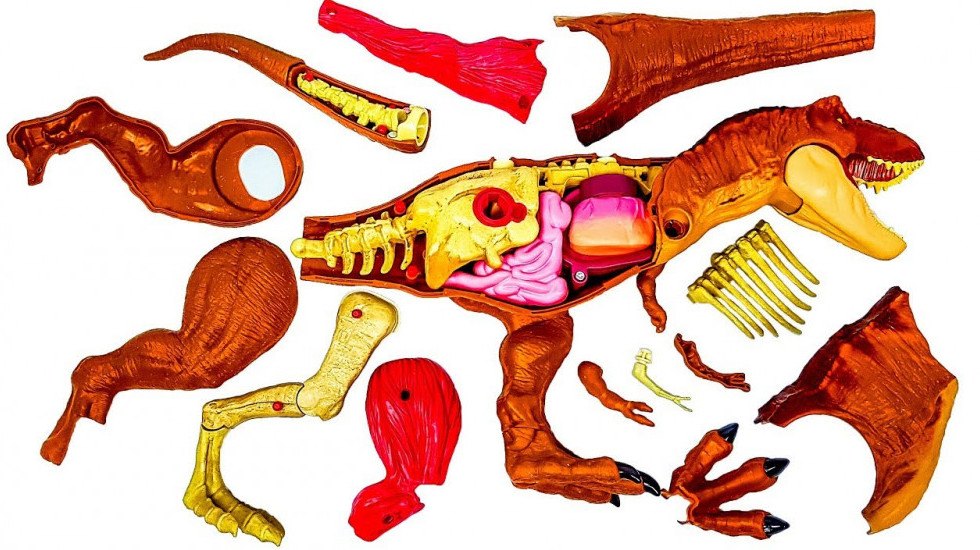 Do you need a fully functional dinosaur anatomy kit for your kid’s birthday? Say no more as we have got the perfect pick for you. If your child is interested in the anatomy of animals, this is the perfect kit to play with. It is optimal to understand the early concepts of anatomy.

If you want the dinosaur’s gut functioning, you have to insert the special DNA key. The key pops right off. After that, you will be able to see the joints move, the lungs pump, and the muscles flex.

Moreover, you can reattach the bones and skin to resume your anatomy destruction. After you are done, do not forget to reassemble or put the dinosaur’s organs in a safe place. You do not want your dog, cat, or sibling to swallow your dinosaur’s gallbladder. 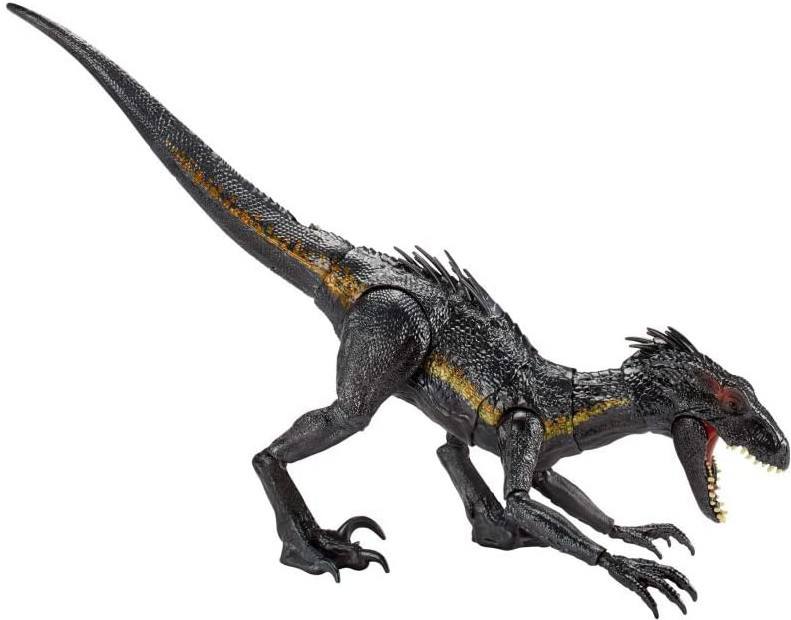 We do not know much about the cruel killer, Indoraptor from Jurassic World. All we know is; it was fast, black, and large enough to eat a whole person. In fact, Indoraptor was the new villain in Jurassic World: Fallen Kingdom. It was a genetic hybrid, like Indominous rex.

Moreover, the Indoraptor underwent experiments in the movie for major upgrades including biological night vision. The upgrades doubled its killing capacity. We saw the dinosaur make a bloody mess in the movie.

The grab and growl indoraptor is inspired by the new villain of Jurassic World: Fallen Kingdom. The toy features glowing yet blood-colored eyes, screeching sound effects, and life-like articulation of legs and arms. The detailed figurine of Indoraptor has created real hype among Jurassic World fans. 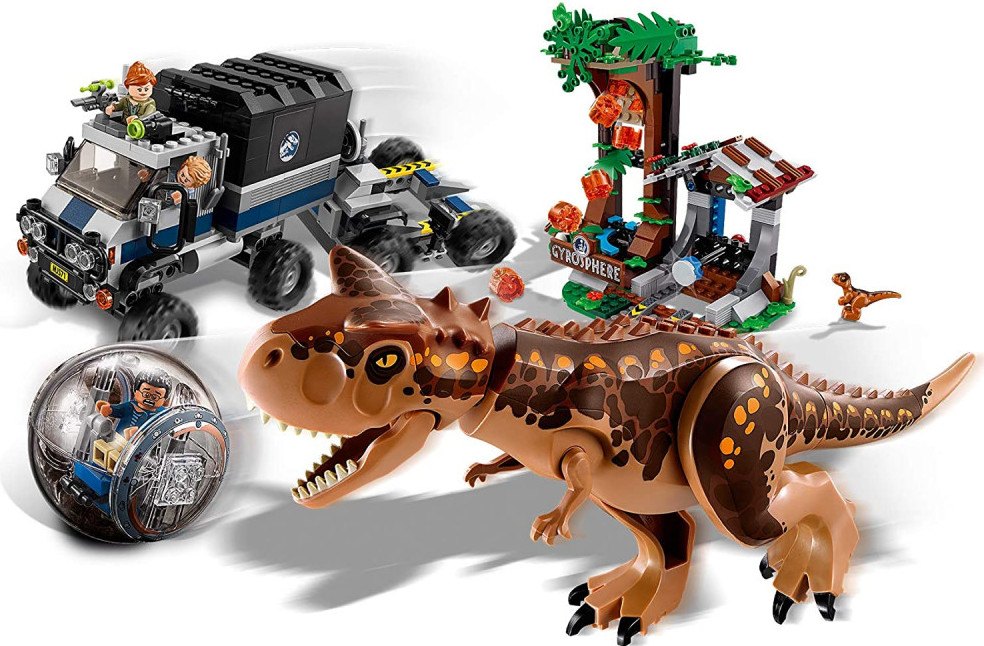 The carnotaurus Gyrosphere escape set by LEGO consists of 577 pieces. The playset by LEGO features 3 mini character figurines (Bryce Dallas Howard, Franklin, and Chris Patt), 3 titular dinosaurs, a detachable trailer, a gyrosphere, and a two-seater vehicle with a sunroof.

Moreover, there are tons of accessories that come with the playset. For example, the mini dinosaurs, the dinosaur eggs, and a mini tranquilizer gun. The eruption mechanism in the playset allows you to play with lava, flames, and fumes. In short, the playset has everything that the carnotaurus needs to BBQ the tourists. 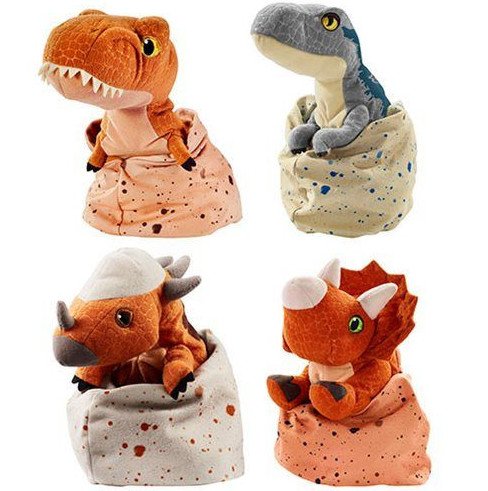 Do you want a less scary dinosaur for your kid? Say no more as this is a cute yet less frightening plushie inspired by Jurassic World: Fallen Kingdom. All the versions of the plushies boast realistic yet fine details of a real dinosaur. The scar claws, the embossed scales, and the pointy spikes are part of the details we are talking about.

Each of the plushies can be folded to become a reversible dinosaur egg. Hence, we call it a two-in-one reversible plushie toy. These transformable plushies are available in Velociraptor, T-rex, Triceraptor, and Stegosaurus.

If your kid thinks that a real dinosaur is lurking outside the window, he can cuddle and sleep with this cute plushie toy. But, these plushie toys are sold in sets only. 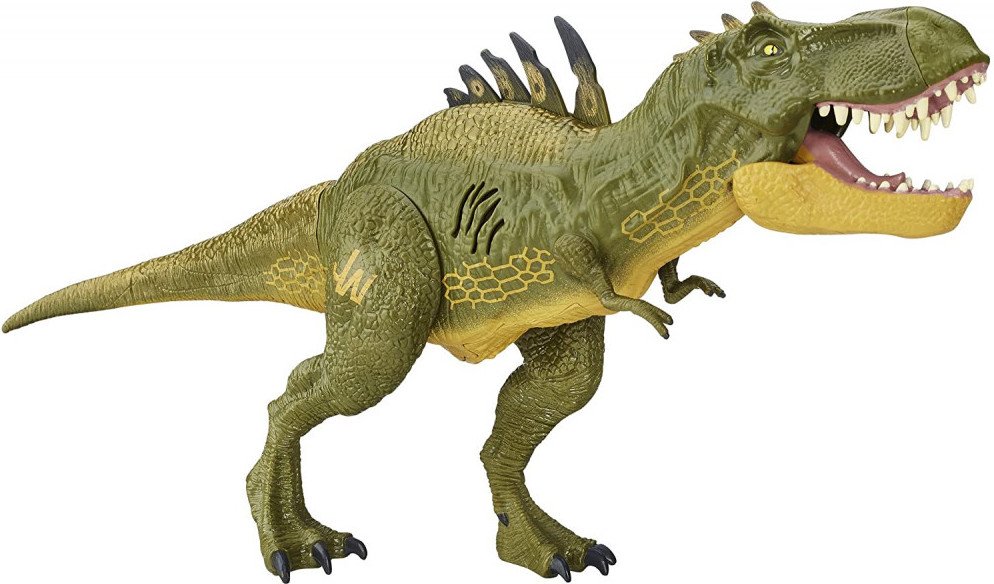 The ferocious Tyrannosaurus Rex was a hybrid dinosaur in Jurassic World. The life-like model figurine of Tyrannosaurus Rex will have you on the edge of your seat. All you have to do is press the button to reveal or conceal the dinosaur’s terrifying spikes.

Moreover, the dinosaur can chomp from his big jaw and snap his tail. In pretend play, this dinosaur can feast on anything in its sight. 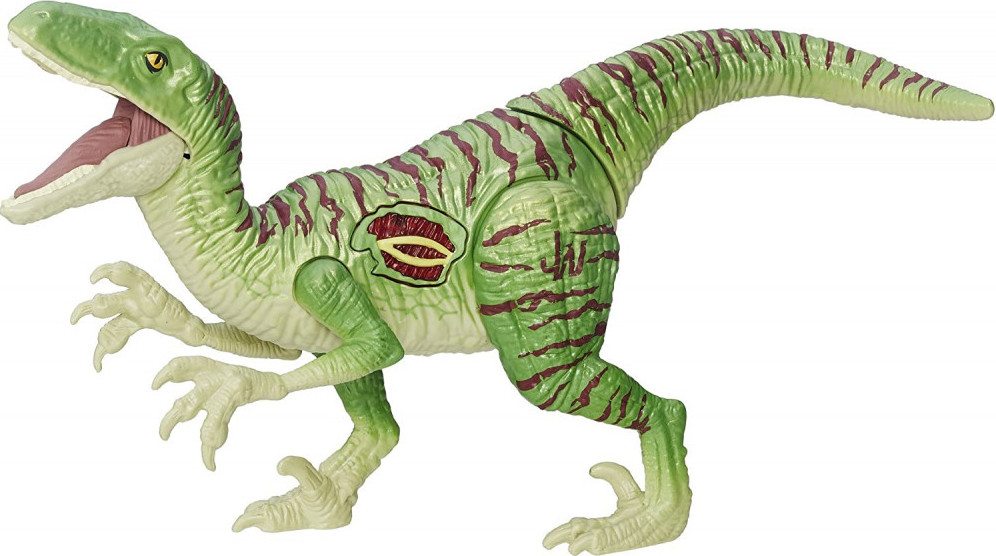 You can recreate the most exciting and terrifying scenes of Jurassic World from the growling velociraptor. The battle damage design gives a fierce look to the model figurine. It features huge jaws to chomp and feast on anything near it. The batteries support articulation and come with the toy. 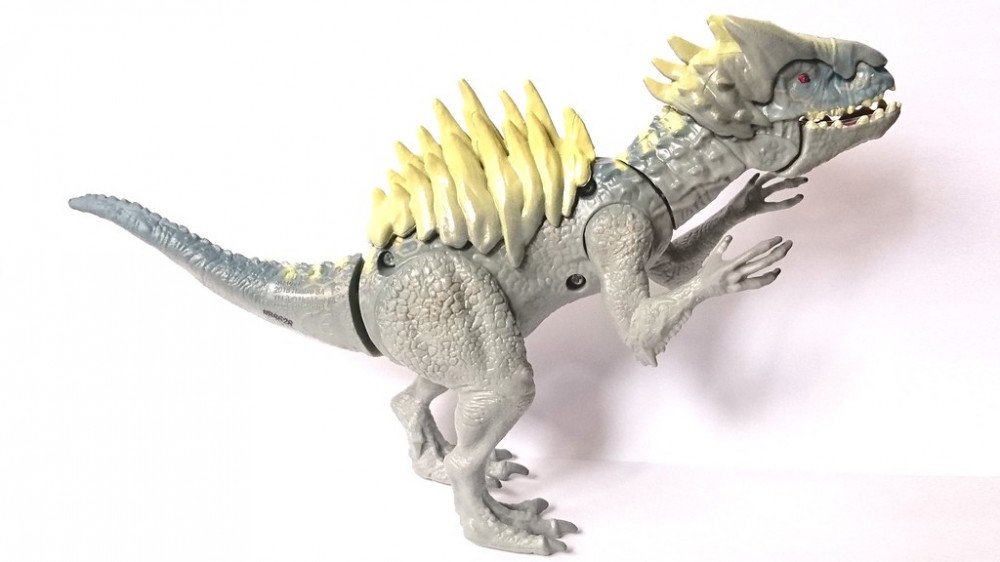 Nothing is scarier than the model figurine of hybrid armor Indominous rex. This figurine toy comes with armor on its spike to double the battle fun. Moreover, its jaws and legs operate on a battery. The playset is quite realistic yet inexpensive. Moreover, there are 4 accessories and 2 model figures that come in the set. 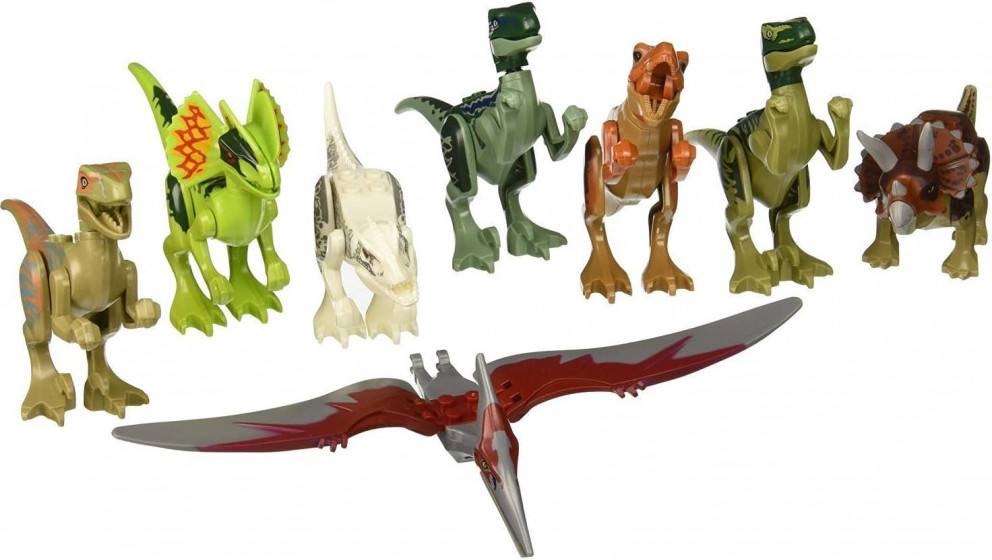 This 8-piece dinosaur set will help you recreate the most exhilarating and exciting moments from the Jurrasic World movie. Each mini-figure stands 3 inches tall. All the model figurines look exactly like real dinosaurs from the film.

What is different in this playset? Well, all the model figurines are building blocks. The 8 dinosaur-shaped building blocks add an extra element of fun. 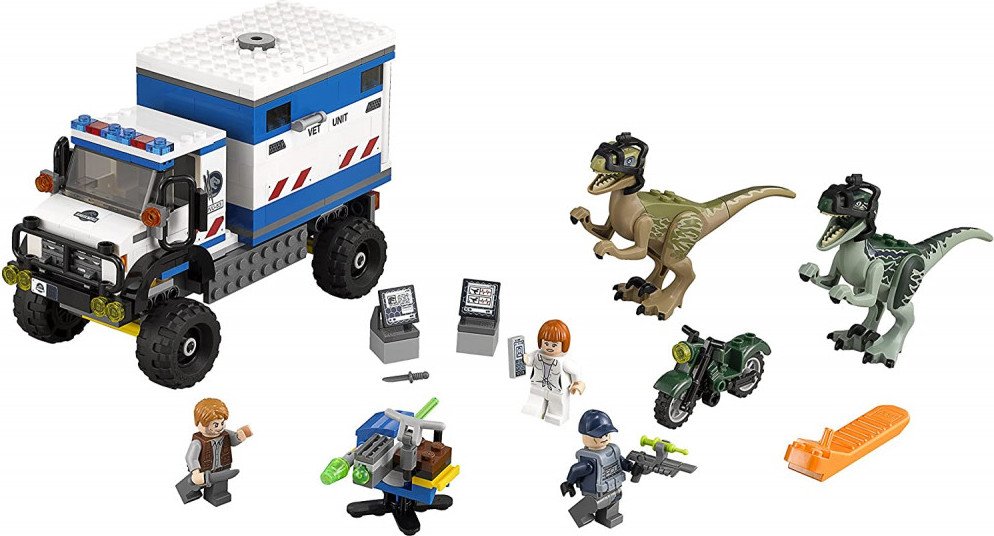 The finely designed yet unique building kit by LEGO helps you to create every dinosaur-killing spree scenario in your mind. Each raptor rampage building kit contains a tranquilizer gun, Owen’s motorbike, a rotating rooftop shooter, a mobile vet, and a mobile search unit. It is a brilliant yet fascinating kit inspired by the film. 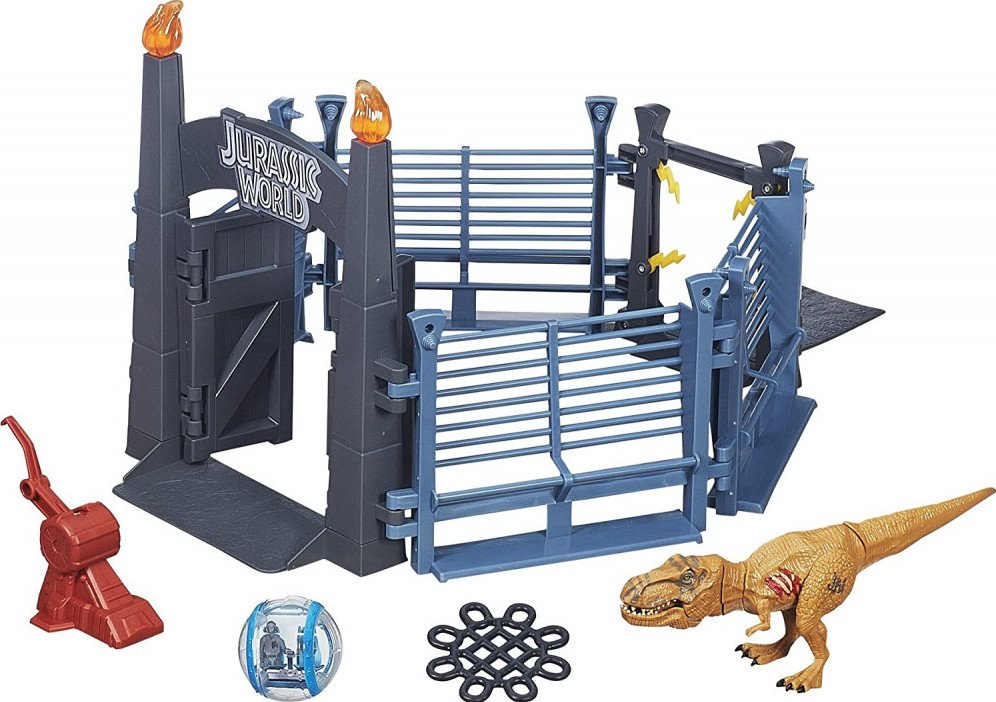 Watching the Jurassic World movie gives you an adrenaline rush. The lockdown playset of Tyrannosaurus offers a suspenseful yet amazing playing experience for your kid. The playset features a moving gyrosphere and a model figurine of Tyrannosaurus. Moreover, it includes a net launcher and an escape gate to enhance the pretend and play experience. 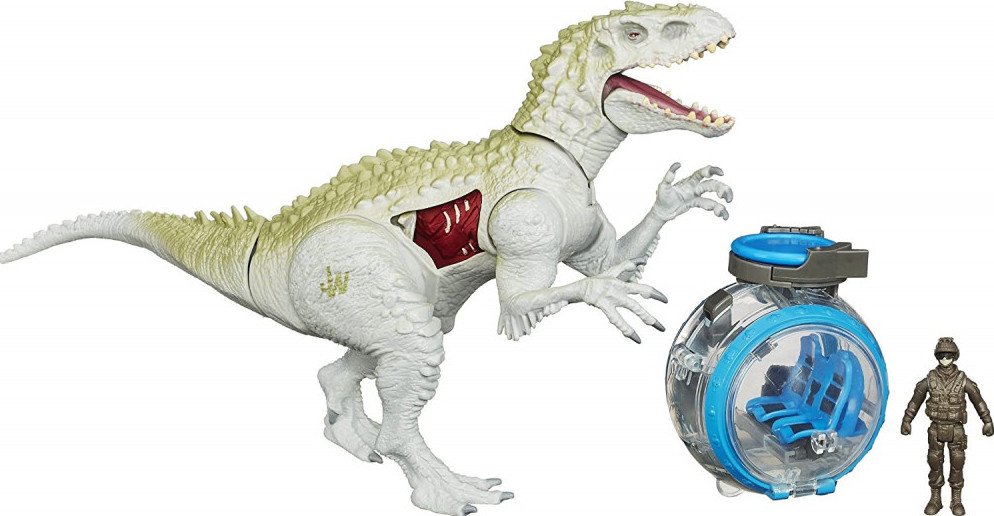 Can you dare to escape the clutches of the terrifying Indominous Rex? You can do it using this amazing yet inexpensive playset. It consists of a model human figurine, an Indominous rex model figurine, a moving gyrosphere, and a projectile launcher. If you install the batteries, the Indominous Rex can make scary yet screeching chomping sounds. 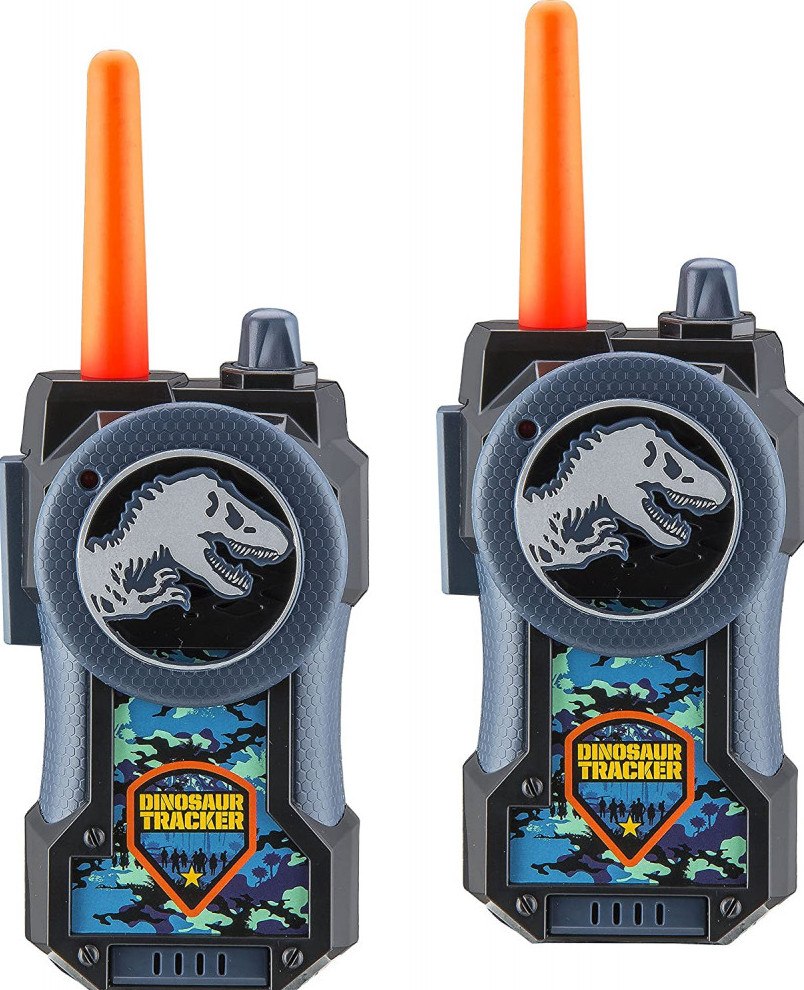 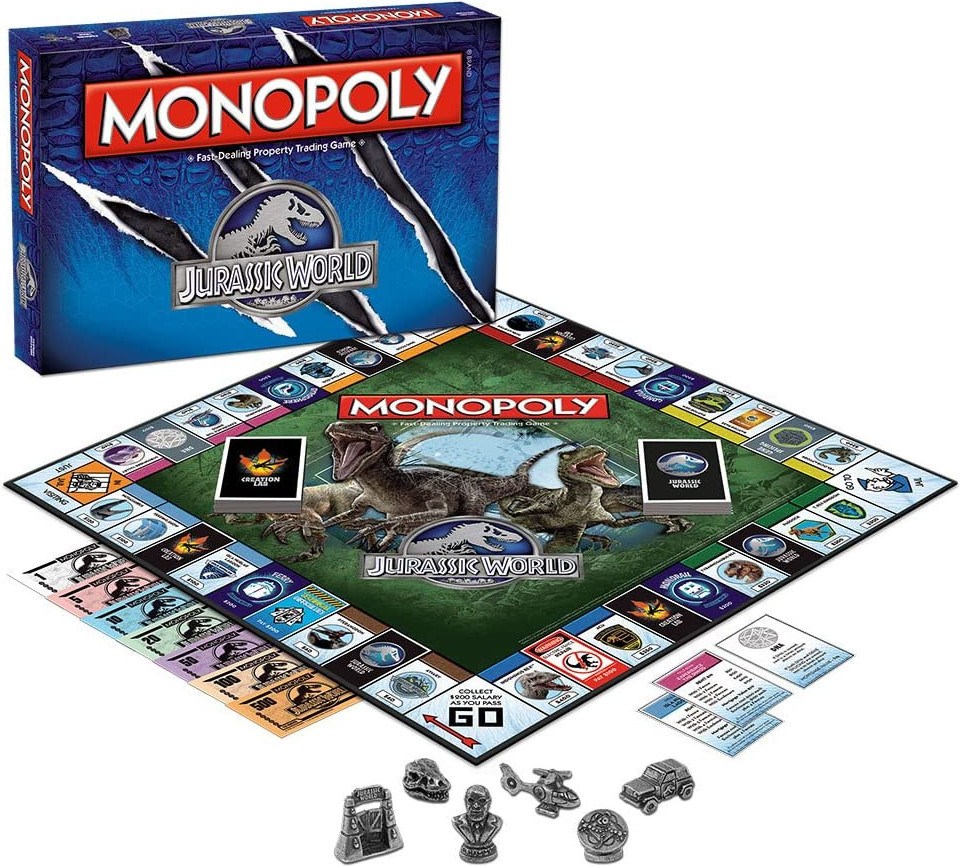 The classic board game, Monopoly inspired by a thrilling movie, Jurassic World is what you need for a perfect getaway with your family. You can trade, buy and sell other attractions and dinosaurs from the hit film, Jurassic World. You have to collect changing tokens to win the game.

If you are up for a thrilling and adventurous playtime with your kid, get one of the above Jurassic-themed toys and experience the real fun.

Let us know in the comments section below what your thoughts are regarding the Best Jurassic World Toys article below.