Although the results of civil wars and regional fights are catastrophic, collecting classic toy soldiers does not hurt anyone. You can not deny children love playing with classic toy soldiers. The small yet brave-looking military figures are made of         plastic and metal. They became appealing in the 19th century.

Even though wars started after the prehistoric era, archaeologists have found evidence of the long existence of soldiers. Archaeologists have found bodies of soldiers in the tombs of the pharaohs. Apart from playing with classic toy soldiers, they are a treasure for collectors. Moreover, buying classic toy soldiers is a serious yet hefty investment for many military lovers.

How To Collect Classic Toy Soldiers

What Factors To Consider When Buying Classic Toy Soldiers

· The history of the classic toy soldiers

· What classic toys soldiers are worth

· The current manufacturing process to sell toy soldiers in bulk

With no further ado, let us start with the most important yet comprehensive phase of the guide, the history. 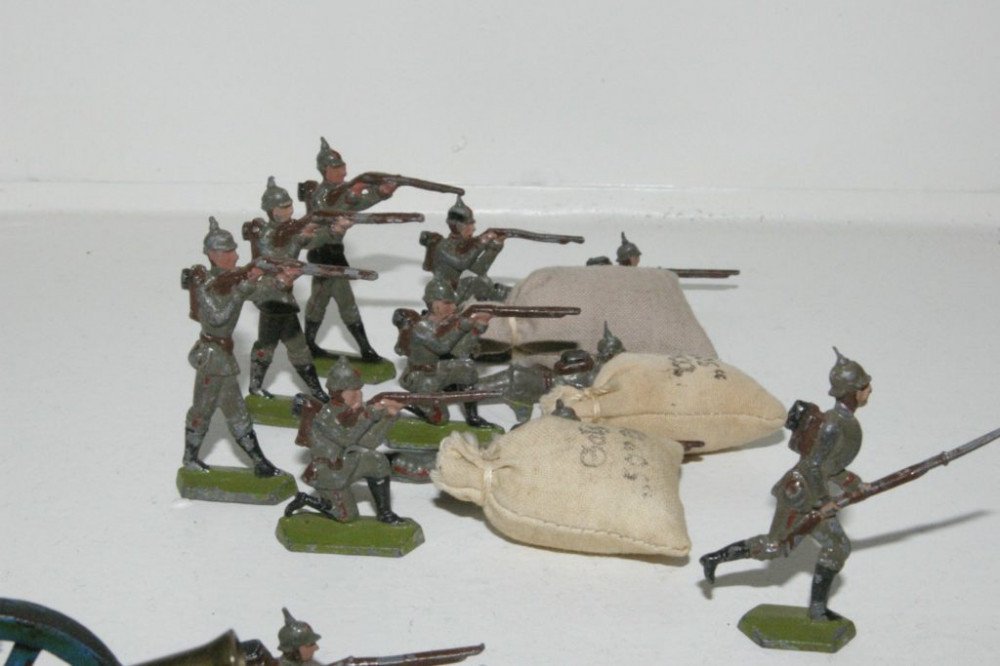 Most toy soldier figures stand between 15mm to 105mm. When we talk about a soldier toy, we mean a very solid figurine with a combat character. The miniature toy usually represents the men in the armed and special forces. Yet, every toy figurine has its own value, specifications, and importance in the collection.

The Evidence Of Toy Figures From The Tombs Of Egypt 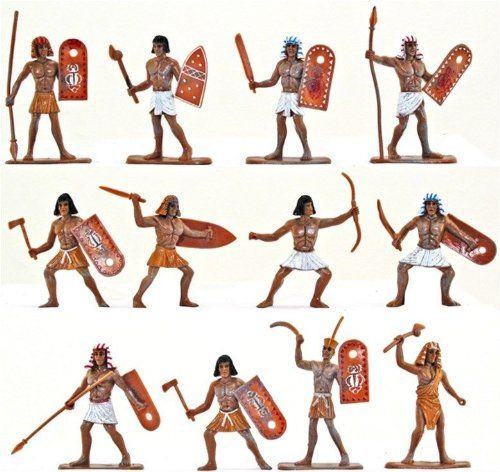 While children now use classic toy soldiers to play, people did not play with them in prehistoric times. Archaeologists have found plenty of toy figurines dating back to 2500 B.C. But, the ancient people used diminutive soldiers for ritual and magical purposes.

The metalworkers made the figurines during the Pharaoh periods using silver, porcelain, and wood. They manufactured them representing all the different soldiers while mapping the battle. Moreover, they used them in war-strategy meetings to help understand the territories better.

Soldier Toys In the 18th Century 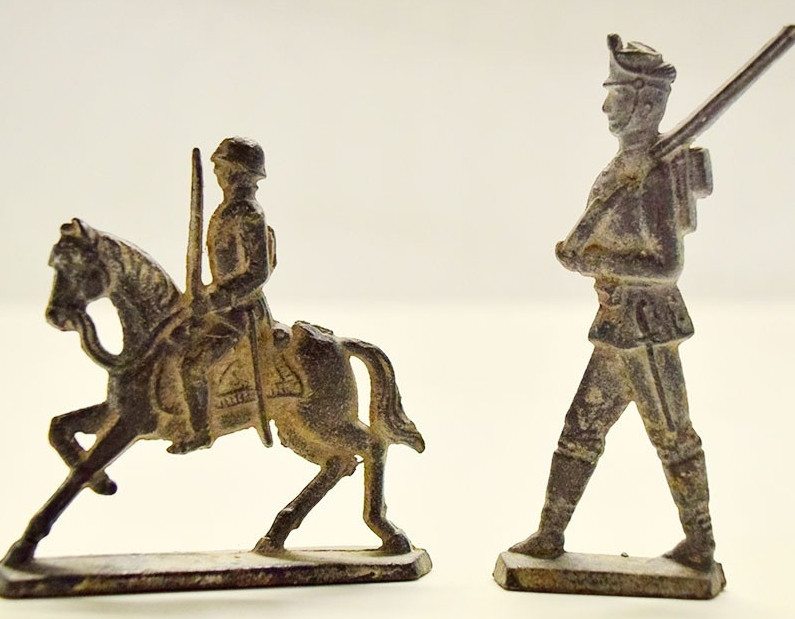 In the early 18th century, people saw a noticeable yet great advancement in the manufacturing of toy soldiers. The metalworkers produced figurines from lead, composite, and tin. They were made for noble and affluent families in the community who could afford hand-crafted items.

Furthermore, the figurines were quite exquisite as they had rich colors and fine detailing. At the end of the next century, metalworkers began producing two-dimensional soldiers as decorative pieces. Although they made them from cheap lead and tin, they were popular among affluent members of society. Also, they did not paint them and called them flats instead of figurines.

Soldier Toys In The 19th Century 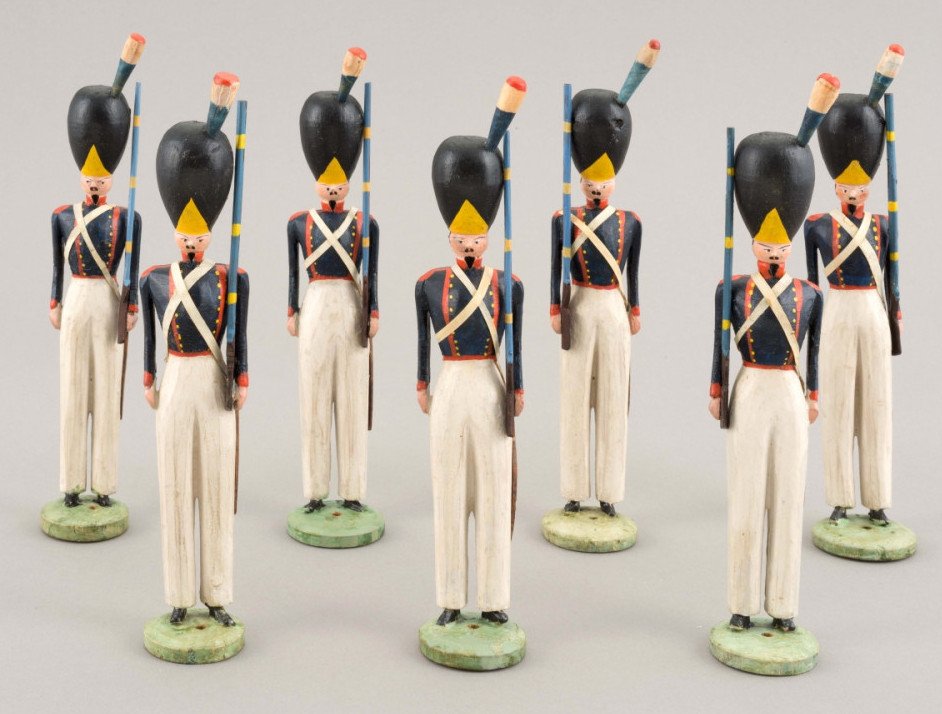 At the start of the 19th century, the figurine makers started producing and manufacturing toy soldiers in Germany. The prominent manufacturing companies at that time were Gebruder Riechewere, Heyde and Heinrichson. Yet, all the companies used a different approach in manufacturing figurines. They carved the characters instead of molding them. Moreover, they painted the figurines in silhouette.

At the end of the 19th century, companies began to manufacture realistic toy figurines. For example, they sold them in ceremonial dresses. But, the purpose of dressing the soldier figurines was to represent various military movements in Europe.

Moreover, the approach to mass-producing these figurines changed as well. The companies used molten lead and a mold to create realistic figurines. After the cooling process, they removed the 3D figurines from the molds. Moreover, the head was joined and the painters painted the figurines to attract a wide range of collectors.

The Revolution In Producing Soldier Toys 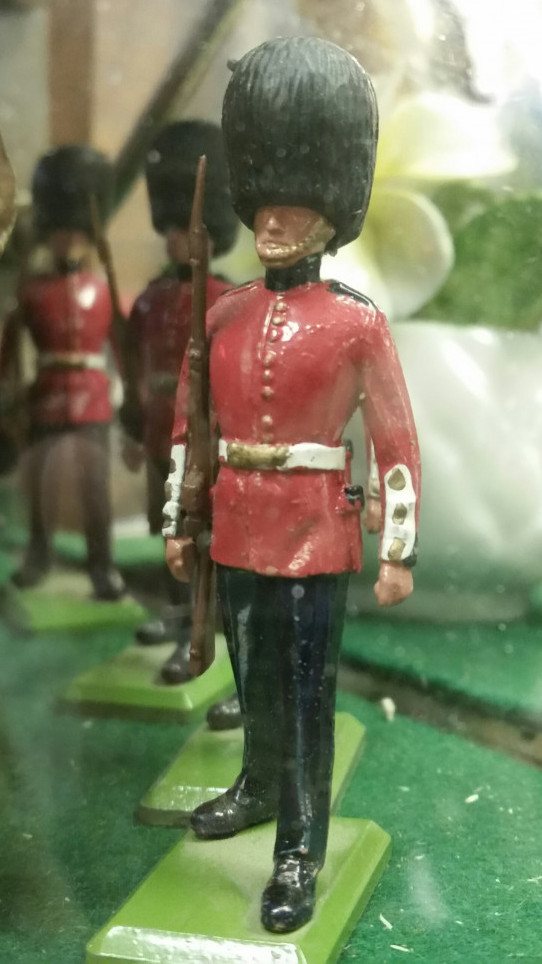 In the year 1893, everybody saw a revolution when William Britain invented the hollow-casting lead method. The process first began in the United Kingdom. It was a revolutionary yet altering process that changed and transformed the future of the toy soldier industry.

The Revolution Of The Hollow-Casting Lead Process By William Britain 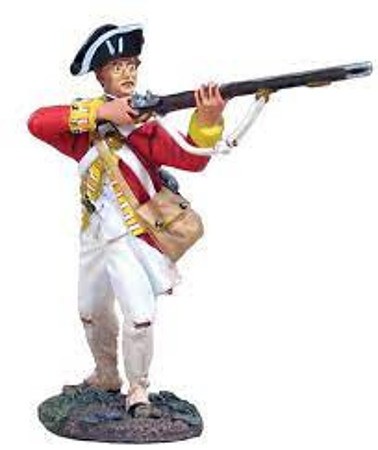 Willian Britain became the leading producer of soldier figurines after 1893. He invented and introduced the first hollow-casted toy soldier in the market. Moreover, the collectors loved the pieces as they were different from previous designs.

His hollow-casting lead solution included molten lead. He used to pour the molten lead into the mold. After that, the metal was cooled for a few hours.

During the process, William Britain decided to leave a narrow opening to let excess molten lead pass. Thus, the figurine was shallow from the inside. This technique did not only make the figurines lighter and cheaper but better than previous versions.

The first batch of hollow yet unique toy soldiers by William Britain were beautiful. Moreover, he hired painters to paint the figurines by hand. But, his figurines only represented the campaigns and the wars of the era.

Thanks to the advanced yet modern production techniques, we can buy a box of 9 exclusive toy soldiers. With a shilling or two, you could add more figurines to your collection. Yet, they were not affordable to everybody in the country. Although they had become cheaper than before, the prices were higher than the average wage of workers.

The Second Boer War And the Use Of Toy Figurines 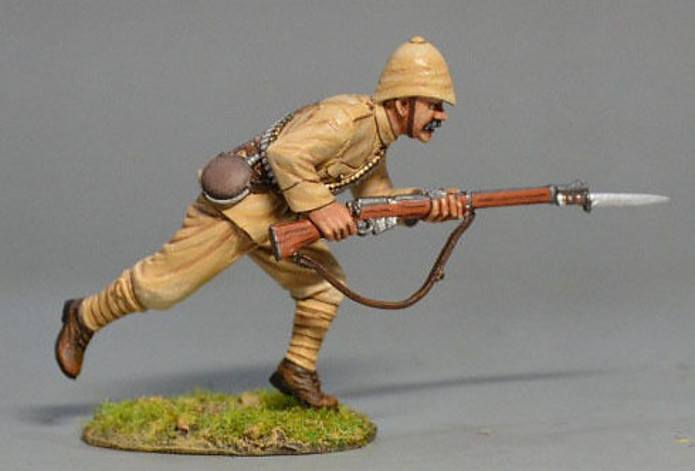 As the second Boer war commenced in 1899, Britain produced soldiers for war strategies too. Moreover, they used them for planning and propaganda campaigns.

In the year 1966, the hollow-casting lead process was banned as the metal turned out to be poisonous. The government banned the use of metal. With that, it prohibited the use of lead in figurines. Hence, all companies had to stop production immediately. Due to the following ban, all toy soldiers and figurines made of lead were referred to as ancients.

The toy figurines before the 20th century became exclusive. That is why they are considered rare in 2021. As of now, a box of 9 soldiers can be worth a huge amount, ranging from 1,000 GBP to 8,000 GPB. But, the price depends on the condition of the toy figurines. 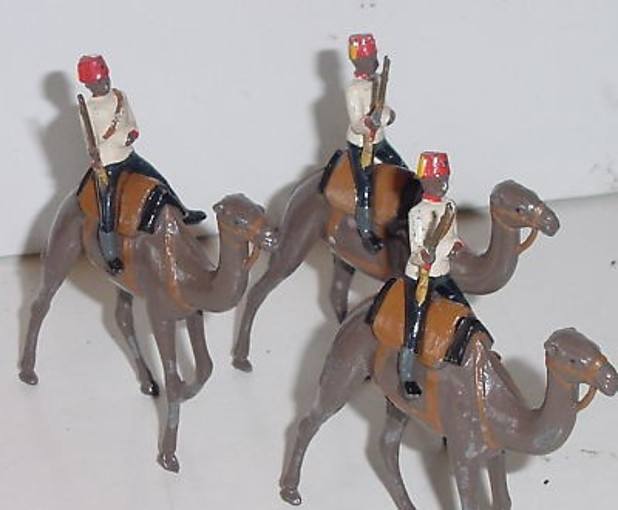 If we talk about the popular or interesting toy soldiers of Britain; two of them were Indian Cavalry and Egyptian Camel Corps. Both of these toy sets were produced in 1896. Moreover, both of them were a prominent part of the military series.

Another popular yet expensive item was the Black watch set (Pipes and Drums). It was produced and sold for 1 pound. But, it is worth thousands of pounds in 2021.

The Scots Guard Set, an early issue of Britain’s piper was sold for a whopping 96 pounds. A collector paid the price and took the set at an auction in March 2019. 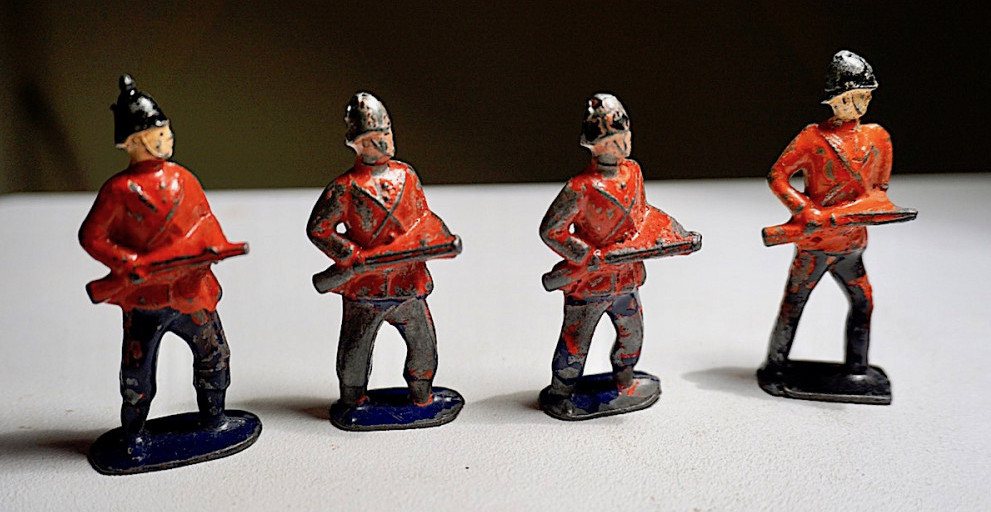 The Establishment Of Barclays – The American Toy Soldier Producer 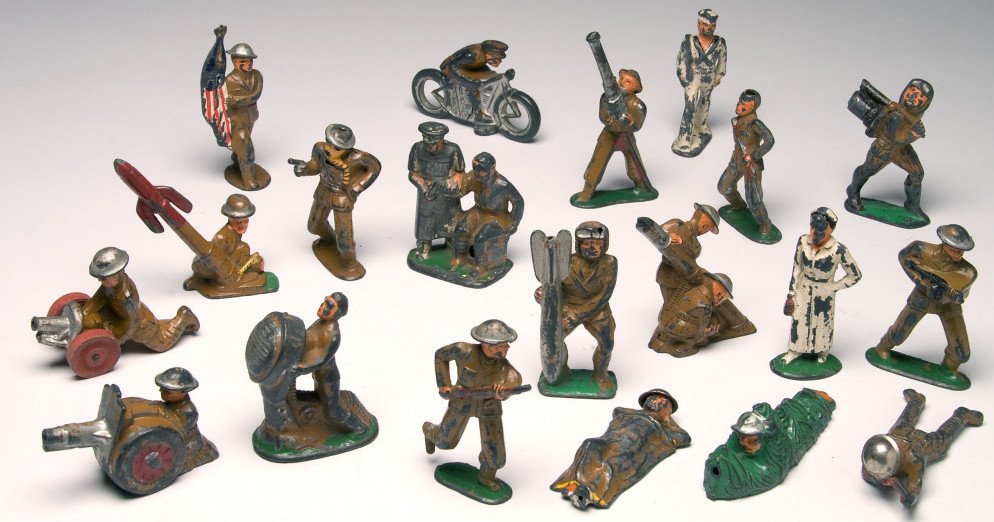 Barclays of New Jersey became the first-ever toy soldier producer in America. At that time, they were popular for their creative designs and life-like action poses. The company was established in 1924. While the UK focused on European military forces, Barclays focused on Native American and North American soldier figures.

The Production Of Composite Figures In Europe 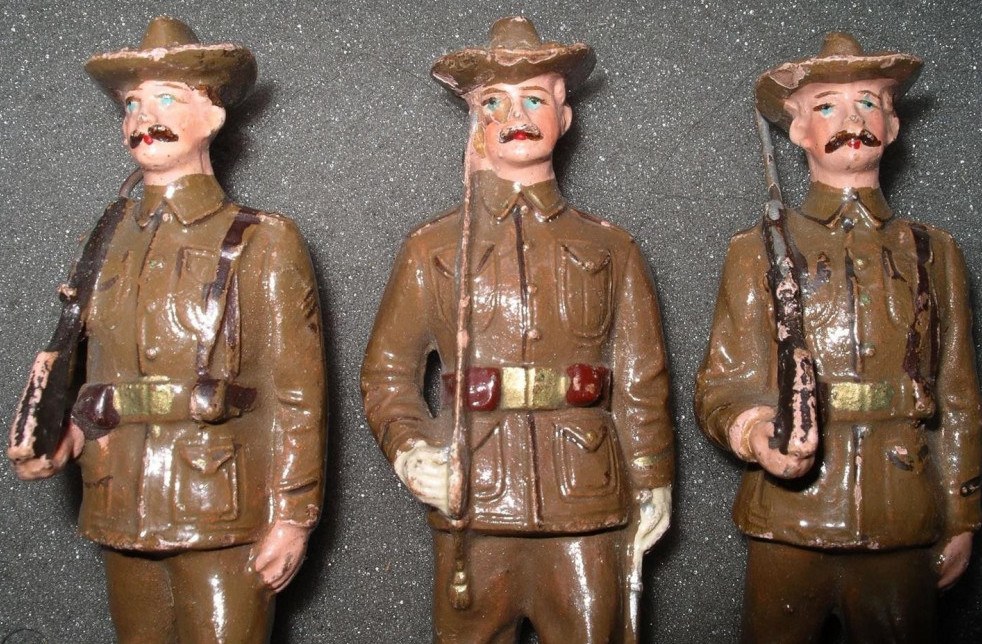 A toy company, Pfeiffer from Vienna produced toy figures using a new technique. The aim was to make a composite material by combining casein, kaolin, glue, and sawdust. The workers applied the paste to a wire frame. After that, the painters painted the figurines. In the early 1930s, a German company, Hausser, and Elastolin produced composite figures to reflect the military forces of the Third Reich.

World War II And Its Effect On The Toy Soldier Market 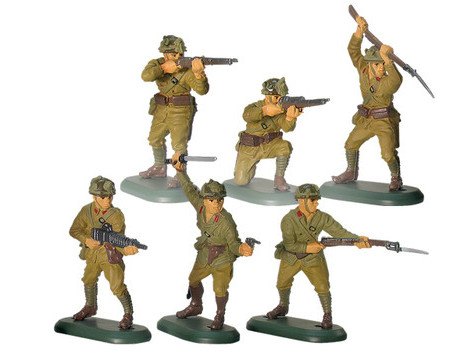 In 1939 as world war II commenced, the companies stopped producing toy soldiers. Instead, all the companies began manufacturing weapons and ammunition. When the war ended, they continued producing metal figurines. Moreover, they advertised them as connoisseur figurines. Yet, they only sold the pieces to the adult collectors. Charles Stadden and Rose Miniature were popular figure-manufactures in the UK, at that time. Both the companies worked to shape the toy industry. For example, the Knights of the Round table was a hollow-lead yet realistic set of toy figures. It was designed and created by Roy Selwyn Smith. But, he was not a stand-alone producer of toy figures. He designed the toy on behalf of Timpo, a toy company in the UK. Timpo was established in 1938 by a Jewish refugee, Salomon Gawrylovitz.

Barclays became a popular selling toy figures brand in Europe. Apart from soldiers, they used to produce figurines of men and women in day-to-day life-like action poses. Later, Barclay collaborated with another company, Manoil, and worked on many projects between the late 1940s to the early 1950s. But, the toys did not have much difference or competition as the producers were the same. Apart from producing male figures, they collaborated to design and create barnyard sets, city workers, and zoo animals. Due to the exclusive nature of the toy collections, they became popular in the UK.

France still focused on improving the hollow-lead casting methods. A renowned producer in France created detailed yet fine figures which caught the attention of collectors.

Edward Jones was the only enthusiast from America to lead the way. It was because of him the American toy companies adopted the hollow-lead casting method. Furthermore, he made several, high-quality toy figurines in Chicago and sold them for a high price. In the post-world war II era, the metalworkers created, designed, and painted the figurines with great detail.

The Era Of Plastic Toy Soldiers 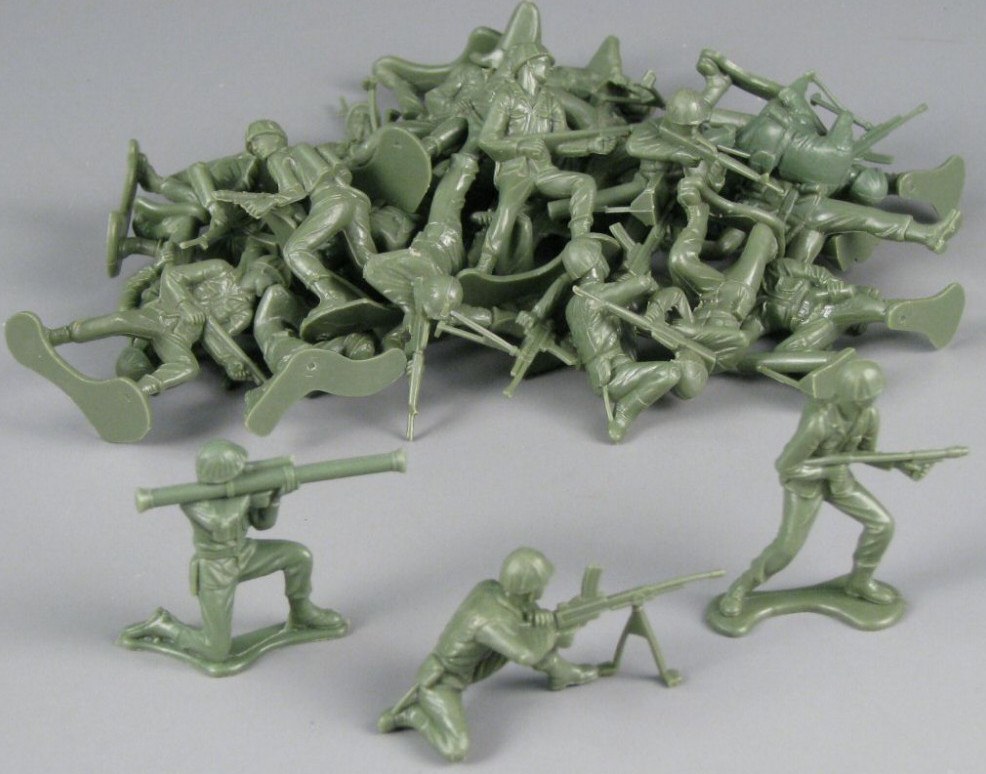 A prominent post-war change was forgoing the hollow-lead casting method and switching to plastic-made figurines.

In the late 1950s, toy companies started filling the mold with plastic injections. Thus, started producing high-quality toys. Moreover, the production became effective, easier, and cheaper than ever before.

While Reamsa, Starlux, and Airfix became popular by embracing the transitions, John Hill and Co. failed to embrace the change. The company shut down in the early 1960s.

Marx, an American toy-making company began producing plastic American toy soldiers. The mass-production inspired millions of men to join the forces and serve the country. The classic Marx toy soldiers were servicemen and wore green outfits. Even today, they are very popular among collectors. Moreover, Marx’s profits started rising as they introduced the Technicolor range of toy soldiers. The toy sets included spacemen, cowboys, and Native Americans. On another continent, Asia, the toy-making companies relied on hollow-lead casting methods until the late 1950s. Trico and Minikins were the main producers of toy figurines in Asia. They made an exclusive range of toy soldiers which still appeals to collectors today.

How Do You Determine The Worth Of A Toy Soldier?

Collectors now sell the rarest toy soldiers at auctions. Yet, collectible toys rely on certain factors to prove their worth.

Some of these factors are:

· Uniform of the toy solider

· The rank of the toy solider

Ancient toy figures are appealing to collectors. For instance, one owner sold the Britain Production’s Army Group set for 247 pounds in November 2017.

Soldier figurine collections are a thriving market. If you have any rare classic toy soldiers, you should contact an expert and find out your collection’s true value.

Let us know in the comments section below how you liked this article and what your opinion is about Classic Toy Soldiers The Complete Guide below.